Tracks the will vote %es during a season. Also, my thoughts. (Decommissioned)

Hey! This won’t be like the other two. Gift Tracker was a look into a simple tool, and Herring Reveals was a significantly more complicated look. As the final entry of the Expansion Era Documentation series, this escalates things by being a tool that I had to delist.

So, what was this tool? Easy - it just tracked the percentage of wills over the course of the season. Chronicler saves historical data, and since the Will% was publicly available in the API, it was also stored. In essence, this meant I just needed to get the right time period of data and display it in a human-friendly way.

Now, you might be thinking one of these things.

An Unkind Look at Wills

So, first lets consider the state of the election for the first many seasons. You had two things - Decrees and Blessings. Decrees worked democratically - whichever got the most votes, wins. Blessings worked on luck - each vote was effectively a lottery ticket, and the more votes you had, the more likely you were to win. Because of this, there was something known as Wimdying - wherein someone with incredibly low votes somehow won the will. 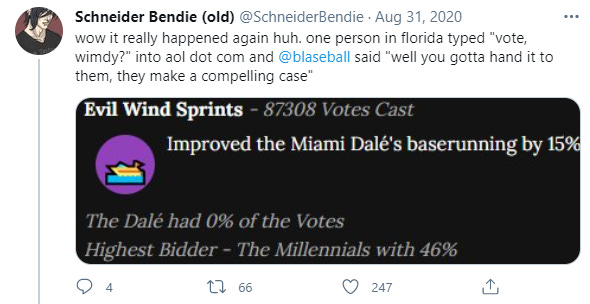 God I love the Miami Dale.

Introduce Wills - which appeared as the third option. The selection of wills was the same for each team, but unlike Blessings and Decrees, each team was guaranteed to win at least 2 of them. They also worked on raffle however, so the element of randomness was still there. However, this ended up causing a lot of problems.

Consider this - with decrees they affect the league, however they are explicitly democratic. You’re not going to have a rogue group hijack democracy to elect an unwanted decree. With blessings, most were explicitly positive, and even for the ones that your team didn’t want - there’s the rest of the league to offset any votes you put in.

However, with wills it starts to cause problems. Since each team is forced to get at least 2 wills, this meant that they needed to group up and point out the desired picks - otherwise the wrong will could be chosen. You’d think wills would be mostly positive - however some traded players, moved players to/from the shadows, etc.

As a result, if a rogue party wanted to go against the team, they could dump some votes and just hope they’d win the raffle - which happened frequently. This also led to discussions of sabotage by people who’d switch teams just to dump massive amounts of votes into the wrong will.

To summarize, wills were a volatile powder keg of political mayhem that caused a lot of problems. So a tool that could show the percentages throughout a season, and as a result show cases such as the percentage of the wrong will spiking, was problematic. I somehow didn’t notice this, probably because it was still early on - and at some point had to just take it down.

That experience sucked, to put it lightly. I made this whole thing I was proud of, that should have been explicitly just interesting - and infact was for statheads - but instead caused pandemonium. Not blaming anyone here - if I blame anything it’s the human condition - but this was a lesson to me about how badly things can backfire.

Why am I documenting it then? Well, it’s been a year since Blaseball entered siesta, and realistically speaking if someone wanted to program it, they would have. Not to mention that when Blaseball comes back it’ll be with a whole new API - so all of this is only useful historically. Plus, I learned how to chart data because of this tool, and I’d like to keep notes on that if I ever want to do it again.

With all that said, it’s time for the code - starting with the initial state.

So! First we have the chart itself - which needs to be drawn correctly. Then you have expected details such as the season and the team to view details for. Next are some modes and any data they’d need - used to view a specific time range - such as After Day 99, which was when most teams voted due to having not entered the postseason.

The seasons object was needed due to historical data - we needed the data for specific time ranges, being during the season itself. As you can see I went for the hardcoded dates approach. Likely not the best, but hey - it worked.

Since we needed to get the relevant data from Chronicler, the date ranges needed to be passed in a specific format. As a result, constructing and executing the request alone needed some logic of its own.

The first step is to setup a broad range - the entire season. This was pretty easy, just use the dates specified in the season map. However, timing was important - the season opened and closed at a specific time - so we had to update the times as a result. Here you can see the start time is set to 08:00UTC, and the end time is set to 18:15UTC.

Then, we need to take into consideration all the other modes.

Here you can see two steps - we move forward four days, then we set the hour to 20. Since games start on Monday, adding 4 days moves us to Friday - and Friday 20:00UTC was about the time when Day 99 ended.

Firstly, forgive the code looking wonky. Like I said, this was way back when, and my skills were still not… honed. Secondly, time is a UNIX timestamp in milliseconds, measuring time since January 1st, 1970 UTC. So to skip four days, you need to turn four days into milliseconds - aka, turn it into hours (×24), then minutes (×60), seconds (×60), and finally milliseconds (×1000).

Final Day is pretty simple - it’s the start of Sunday. So, skip forward 6 days, and set the hour to midnight.

Before Postseason uses the same date as After Day 99 - however this time it updates the end. Like this, you can check the calm period where most teams are biding their time until the season ends - just incase something happens.

Specific Day (UTC) is where the complication starts - since here we start dealing with user inputs. However, things are still simple - if the user picks Tuesday for example, then we need to skip 1 day, set the hour to midnight, and set the end date to 24 hours later. Luckily, we could just use indexOf to see how many days we should skip, since in our case Tuesday is the 2nd day, so it’ll be at index 1 - and so on.

The most complicated mode is Specific Range (UTC) - since now you have two inputs. Besides the dayChosen section which uses the same trick to see hoow many days to skip - there’s an if. Luckily for current me, past me added a comment to explain why it’s here - being that since specificDay1 is shared by Specific Day, it could end up being after specificDay2 - in which case we just reset to Monday to Sunday.

After that, we just need to skip forward dayChosen1 days for the start - and for the end we need to skip by dayChosen2-dayChosen1+1 - because start would have been updated by that point. The +1 is there so that if the user specified a range of Wednesday-Wednesday, it would cover 24 hours instead of 0.

After all of this, we finally perform the request.

Since I didn’t have typescript back then, and I don’t want to send a test request to Chronicler, here’s a rough schema of the response based on how I use it.

Showing the usage is likely better than trying to explain it directly - so let’s start there.

…loving the Pyramid. Here you can see that we’re effectively going through all the will data in order to store it for plotting. Each Will had an id, which we use to differentiate between then, then we append points based on when the data was valid (aka around when it was retrieved), and the percentage of votes it had.

In other words, updatePlotData effectively stores the percentages across time for each recognized will.

Now the response is paginated, so in order to get all the data we need to go through page by page. This is where we use nextPage - looping to request the next page until there’s no more pages left. Once the loop is done, we’ve gotten all the data for the time range.

…and before we start working with charts, we need to have a blank slate - so we destroy whatever chart might already be present.

Ah, it’s time for the area I completely forgot - charting! I have forgotten literally everything about charting, so this is as much of a learning experience for me as it is for you all.

Since charting works by using <canvas> - we need to first get the canvas we’d like to draw on. The colours are there so that different wills contrast with each other. Then you have the willIds and the datasets - needed for plotting later on.

Now, paddingRef will store the length of the dataset. However, since wills can start being voted on at any point, this means certain wills will show up later on - meaning there’s less data points for them. That’s why we use willIds[0] - it will store the ID of the will that showed up first - and hence has the most data points.

Those wills need to be padded in order to be of the same length - since otherwise charting will bug out and break. In other words, instead of nothing, they’ll start off being marked as 0% until their first votes start coming in.

Then we set up the dataset for each will - now of equal length each. We need the label, for which we use the id, the data, a colour from the array we specified earlier, and other details for cosmetics.

Finally, we configure the chart so that it can be drawn. I’m not showing the full code here because it’s… very long - and at this point we’re just placing values in the right places to make the graph look all pretty. Instead I’ll show the final line, which displays all the effort we’ve put into this.

…and there you go!

Charting is not too complicated, infact if I used Typescript from the start it likely would have been much easier. That’s the lesson for today. Use typescript.

Well, that - and also that part of being a programmer is to consider what consequences your project might have. Programming is a skill and artform that creates tools which allow people to do things they otherwise couldn’t. Knowing how people can use your code, knowing the worst case scenario, and drawing the line at whatever you think is acceptable is a key part of programming - and ignorance isn’t a justification.

However, even if you perfect this skill - time changes things, and something that was legitimately a good idea can easily twist into a dark version of itself. Like here, the will tracker was just a fun thing people could use to see their efforts graphed - but as time went on and wills became more of a volatile issue, it ended up becoming a source of mass paranoia.

All it was meant to be, is a visualization of past data to analyze certain events - such as seeing how conflicted a team was, or strategies like voting for a will which includes a temporary player on the team.

I hope this was a good read! I’ve been meaning to talk about this thing, since I am proud of it and many people really enjoyed it - and I never really got a chance to air out my thoughts about accidentally encountering the Frankienstein Effect.